Long train journeys are an irrefutable part of life for most middle-class Indians. They have taken centre stage in all the vacations of our growing up years. And they continued to play a large part of all travel till we moved out of India. The joy in these railway adventures revolved largely around the food we consumed during the often 12-30 hour journeys.

Of all the dozens of boarding and alighting train stations – not to mention all the many more dozens of stations en route – that we traversed, one that comes to mind is Madras Central – now renamed by those who should have known better, as Puratchi Thalaivar Dr. M.G. Ramachandran Central Railway Station. A fun fact … this renaming gave it the distinction of having the longest name of all railway stations in India! It is a stately old building with immense charm. Designed by George Harding, the building was constructed in 1873. Since 1907 it has been the main station in the city and even today this is one of the busiest railway hubs of South India. 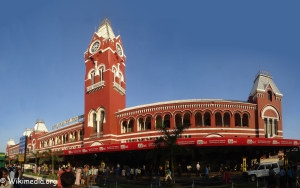 During the many years that we lived in Pondicherry (now renamed Puducherry!) and in Madras (renamed Chennai!), this railway station was the scene of many welcomes, adieus, departures and arrivals. The station was always chaotic and colourful. It has provided many hours of entertainment to us as we waited for guests or for our own train to depart. A visual lesson in human behaviour!

It was also perennially overcrowded, hot, dusty, noisy, smelly. Please note, smelly is of particular import to this story.

We transited the station many times late at night to board the train to Bombay (now Mumbai!)  or Bangalore (now Bengalooru) or Secunderabad (now, thankfully, still Secunderabad!). We would stop at the “Railway Services Cafetaria” for a quick meal. This was the usual South Indian traditional fare – idlis, dosas, vadas or some form of flavoured rice. On one of the many evenings, having reached earlier than schedule and with plenty of time on hand, we roamed around the station. It was on platform 5 – not a platform which we frequented – as we approached a small kiosk, there was a distinct aroma of food. The whiff of hot roti (a basic Indian flatbread), or chappati – as they call it in Madras – and a medley of spices was unmistakable and mouth-watering.

On closer inspection, we discovered that these chappatis were being made right there – on the griddle. Next to the griddle was a simmering pot brimming with a curry made of potato and aubergine / brinjal. 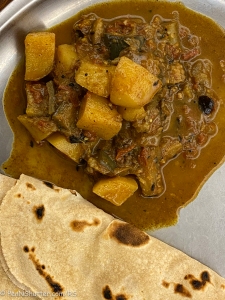 The sight of that hot fresh food convinced us! This had to be tried – irrespective of my husband absolutely hating aubergine at that point in time! One mouthful and that became my staple pack-and-go meal for every journey, henceforth!

The memory of the aroma from that kiosk haunted most of us who had eaten it. One such person, a cousin of mine, could not stand the pain of nostalgia any longer and decided to experiment in her kitchen. With stupendous results. Hats off to Amitha Venkatesh for having literally dreamt up this recipe! I have no idea what the chef on that railway platform put into his pot, but this comes a very close second to his efforts. We had no idea how to name the dish. But, Madras Station Special seems to me very apt! 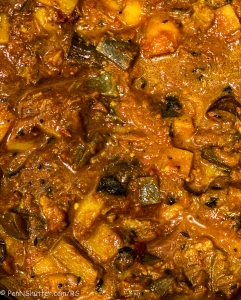 Heat oil in a pan. The quantity of oil is entirely at your discretion. You can add more and make it less healthy and more delicious. You can add none and make it very “diet food” and it will still be delicious. Just do not burn the ingredients! Temper with brown mustard seeds -(I suggest covering the pan at this stage – those seeds splutter and fly as far and much further than you can see! Once the spluttering stops, add the cumin seeds, asafoetida, curry leaves and chillies – make sure the last two are completely dry! Any water from having washed the leaves will cause a small and potentially painful explosion in the pan! The chillies give out a potent aroma when they fry – be prepared for a sneeze or two!

Once the chillies are all blotchy and white specked from the frying, add the onions. Let them turn translucent. Now add the potatoes and let them get half cooked. The only way to figure this out is by sticking a knife into one and hoping it does not slide in easily – which would mean they are fully cooked! If this has happened, never mind. It is completely irrelevant to the finished product! Add the aubergine and continue frying for a few more minutes. (Few is rather vague, so make that 5. Or 7!)

At this stage add in ALL the remaining ingredients except for the yoghurt (if you are using it). Pour in about a cup of water to ensure that you do not burn your gourmet dish for the day! Leave it all to simmer. You should soon – in about 10 minutes – have a heavenly aroma filling your kitchen. When it looks ready to eat, add in the yoghurt (again, if you are using it!), stir thoroughly and take off the fire!

Instead of adding yoghurt, I chose to mash the veggies a bit to create a thick gravy. The back of your ladle will do as well as a fancy potato masher – everything should be well and truly overcooked by now.

Serve with hot and soft rotis / chapaatis / fulkas. Or rice. Or bread! Or, like me, simply fill a bowl and slurp your way through it!

We wish you all many delicious food journeys in life!

One thought on “Madras Station Special”