2015 began beautifully. And it continues to shower surprises. We got an email from the David Sheldrick Wildlife Trust that they had been approached by National Geographic to do a story on Roi. They wanted to use our pictures! Now that was fantastic news for amateurs like us!

But what really grabbed our attention was the coincidence. Ever since the tragic sighting of baby Roi with her mother’s corpse, we have been haunted by a need to “do something”. We have adopted her, yes. But that is nowhere enough. The world needs to adopt her and her brethren. The world needs to know the truth about elephants and poaching.

And that is something we can try to do – tell the story.

Olare Motorogi conservancy of Maasai Mara is one of our favourite safari grounds. We choose to stay at the Porini Lion Camp What the conservancy offers in terms of wildlife viewing is impossible for words to convey. The variety of animals and the viewing proximity are fantastic. As is the lack of teeming hoards of tourists. Every safari of ours has had a very private and privileged  feel to it. We have spent time and photographed practically every species of mammal of the Mara there and quite a few birds. The creatures of the wild seem to find the conservancy a safe haven to live and procreate in significant numbers.

Next to the rhinoceros, probably the least seen animal in this part of the Mara is the Elephant. We have done trips where we met none on the conservancy.

Thus, in October, last year, we were pleasantly surprised to see a large breeding herd of elephants quite close to our camp and spent many hours on our various game drives in their company. Elephants are social beings. They raise their young in families. Mothers and aunts nurture all the young ones. When they are relaxed and sense no threat, they come quite close to you. 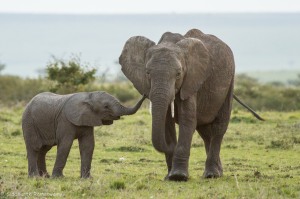 To be amidst these huge and gentle creatures is truly beautiful. Observe them long enough and you can see how the social hierarchy works. Mothers suckling calves.

The little ones being disciplined. The silent communication with each other. The antics of the young.  The loving tolerance of the older elephants. The unswerving obedience of the entire herd to the matriarch. If you are fortunate, you will see the big bulls on the fringes of the herd. And those are simply magnificent.

On our last game drive for that visit, we went looking for the elusive leopards and failed to find them. So around 9.00 am when we spotted the elephant herd on the horizon we decided we must go and say a quick hello to them.

As we approached the herd, we could see that one was lying down. Now this is not unusual. Elephants do lie down to rest their feet – a few of them at a time – while the rest cluster around just feeding. But as we got nearer, we realised that there was something wrong. None of the other elephants were feeding. In fact, they all surrounded the one on the ground. And they completely ignored our approach though it was perfectly apparent that they had taken notice of our presence.

As we got closer our guide, Big John said “there is something wrong”. And by then, even we knew that. He picked up his binoculars and after a long look said “she’s dead”. While deep inside we knew the truth, I don’t think any of us wanted to hear that. Coming from our guide it could only be a correct analysis of the situation. He said she may have died of eating something poisonous or possibly gastroentritis.

We moved in closer still. And witnessed the most heartbreaking funeral we have ever attended. We saw a tiny baby (Big John said he or she was surely less than an year old!) trying desperately to tug on the mother. The little one finally put its trunk on her in complete defeat. We could clearly see the confusion and distress in its body language. And sorrow in its eyes. 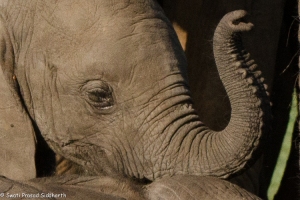 One of the other younger female elephants gently pushed the baby into the centre of the herd. The matriarch was at the head of the body. She lifted the head with all her strength and gently lay it down again. 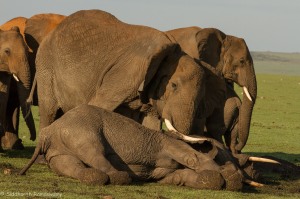 All the other members of the herd gently nudged and tried to lift the prone one. Then, slowly, led by the matriarch, they circumambulated the corpse and walked away – not once, not one of them turned back. A few meters away, they stopped and waited. It was the most silent and dignified ceremony we have ever witnessed.

They left behind the grieving calf with the same young female. It was almost as if they were giving the baby the space and time it needed to come to terms with its loss. After a while the elder one (Big John felt it could well be a sibling to the dead mother) slowly coaxed the baby to walk towards the rest of the family.

The baby went but stopped and came back. The aunt (presumably) patiently came back and stood with the baby a while longer. We were on the opposite side of the body. At one point the baby raised its trunk and, though fanciful, it seemed as if it was asking us to come help wake its mother.

After a while the two of them walked away to join the herd. And this time the orphan did not look back either.

There was pain and sorrow in each of the elephants eyes. There was loss and heartbreak and pathos in each line in the body of each elephant.

And people say animals have no feelings …

Big John called the conservancy officials to notify them. We talked about the orphan. He said that the little one would only survive if one of the other lactating mothers chose to adopt and feed the baby. We followed the herd for a while. We knew we had a flight to catch and time was limited. But we still followed them. We saw the little one reaching out to other calves. And to our horror we saw it being kicked.

And though the matriarch was being very protective of the little one, she had a calf of her own. She was not allowing this one to feed from her. And neither were any of the other lactating mothers. 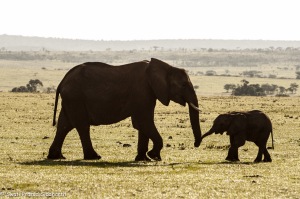 This was devastating to watch. For it essentially signed the death warrant of the orphan. A milk dependent elephant cannot survive without its feed.

For us it went without saying that we needed to reach a phone. The first thought that occurred to us was “The David Sheldrick Wildlife Trust” – they had to be called in. And whether or not that was a politically correct act, we knew we would be making that phone call as soon as possible. From that moment we could not wait to get on the plane and get to Nairobi. We made that call at about half past 12.

To our relief (indeed we felt a bit foolish for assuming responsibility for informing them!) they had already been notified and their rescue team were on their way. The next day they were kind enough to let us know that the baby had been rescued and brought into the orphanage.

And then began a long and tortuous wait.

The first few weeks of an orphaned elephant are very critical. They can die of a variety of causes. Some could die of dehydration – even the few hours since the last feed from the mother could be too long for the delicate body to cope with. But often they die of sheer despair. And no. That is not us being dramatic. That is the plain, unvarnished truth. They cannot cope with the loss of their mother and their family. They die of heartbreak. People do not die of this. Elephants do. 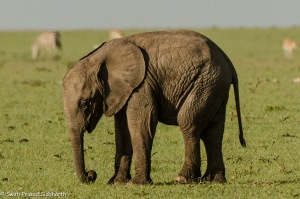 So, as a matter of principle, the DSWT does not make public any rescue until the orphan has stabilised and seems to have decided to fight for its life. And this often takes weeks. They requested us not to talk about the rescue either and not to share our pictures yet with anyone till they knew the fate of the calf. We understood that we could not keep calling them. And yes, to an extent, there was an unspoken, superstitious feel to the wait.

On 11th November we awoke to the jubilant news that DSWT had chosen to announce Roi, the newest female member of their pachyderm family, to the world. Its too early yet to say that Roi will grow into an adult elephant one day and walk free into the wild. The best that can be done for her is to give her a fighting chance and that is being done by the DSWT. They are giving her as much love and care as another species can give her. They are giving her the best material comfort they can offer in terms of food, shelter, medical aid and space to grow.They will nurture her and do their best to rehabilitate her into a wild herd.

But the immense sense of relief that she had made it this far is tempered by horrific news – further investigation has revealed that the mother had been poached. More heartbreak.

And this time pure anger. A beautiful animal has been murdered in the prime of her youth. Probably a first time mother. A close knit family has been plunged into grief. A baby orphaned. Horror, pain, desolation. And all to appease man’s greed. This is inexcusable. Its a blasphemy on the term “human” being. No creature should be condemned to a childhood without the protection of its natural mother. No creature should be made to live without its natural family.

The bigger tragedy is the enormous number of such murders being perpetrated across the world. Elephants, rhinoceros, lions, leopards, seals, whales … no species seems to be safe from the gutless, greedy grasp of man. While we can rant and rave endlessly on the subject, we will – for now – stop here.

With an appeal to each of you. Think about the issue. Read and educate yourself. Tusks do not fall out – elephants are brutally killed. Rhinos are killed for their horns – often they are shot, immobilised and their horns sawn off and the animal is left to bleed to death. Baby seals are clobbered to death – on their heads! – to ensure that their beautiful fur is not damaged! None of this sounds “nice”. Simply because it IS gruesome.

If you want to contribute money – do so. There are organisations working hard to save these precious lives. They need funding. To house and feed and rehabilitate the rescued animals back to the wild. To pay staff so dedicated they spend not just the whole day with “their” babies, but sleep with them in their stalls – trying to make-up for the lost mother. To fund anti poaching teams. To educate local communities to value their natural heritage. To provide economically viable living options to current and potential poachers … The list is never-ending and the need urgent. At the DSWT it costs about US$ 900 per month just to feed one orphan!

The one way you can all do your bit is to spread the word. Please do so.

Think about this issue. But not for too long. An elephant is poached every 15 minutes in Africa. Experts believe that in less than 10 years, elephants will be history. Ecological conservation is no more a page 3 issue. It is our only hope for survival.